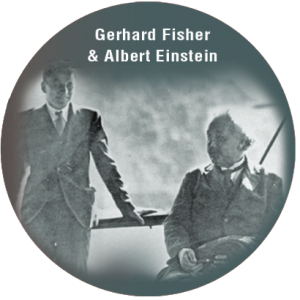 Fisher Research Labs was founded in 1931 by Dr. Gerhard R. Fisher, the world renowned engineer and inventor who was the first to receive a patent for the metal detector. From its simple beginnings in Fisher’s garage, Fisher Research Labs is a made-in-America success story. The world’s oldest metal detector business, Fisher Labs uses the latest in technology to build the most trusted products in the industry.

A start in aviation navigation
Dr. Fisher, a German immigrant who studied electronics at the University of Dresden, was a Research Engineer in Los Angeles in the late 1920s when he obtained the first patent ever issued for aircraft radio direction finders. His revolutionary work in aviation attracted the attention of Dr. Albert Einstein. After seeing a demonstration of Fisher’s equipment, Dr. Einstein predicted the worldwide use of radio direction finders in the air, on land and at sea.

Aircraft pilots who used Fisher’s early navigation tool found errors in their bearings when metal objects came between the transmitter and receiver, or whenever they passed over certain terrain. Dr. Fisher determined the errors were caused by the presence of highly conductive, mineralized substances. This discovery led to his invention of a portable electronic prospecting instrument, based on the same principle, used to detect the presence of buried metal objects and ore deposits.

The Metallascope gives birth to an industry
In 1931 Fisher founded Fisher Research Labs in his garage in Palo Alto, Calif. He and four employees produced the « Metallascope, » a rugged, easy-to-use metal detector. By today’s standard of lightweight handheld detectors, it was an ungainly device with two large, flat wooden boxes containing simple copper coils, five vacuum tubes and a few assorted components. The Metallascope soon captivated the imagination of the country, and within a short time, the world.

Around 1933, the U.S. Navy hired Dr. Fisher to install a radio direction finder aboard the dirigible, the USS Macon. It was aboard the Macon that Dr. Fisher discovered that large metal buildings and mineralized mountains blocked his navigation device’s direction finding capabilities.

Demand for the metal detector spurs growth
In 1936 Fisher Labs moved to a small building at 745 Emerson St. in Palo Alto to meet the growing demand for the Metallascope, which was nicknamed the M-Scope. Shortly thereafter, Dr. Fisher was granted a patent for his invention. The M-Scope became the accepted standard for all types of electronic metal detection. Geologists used it to locate ore, treasure hunters found treasure, utility companies pinpointed buried pipes, lumber mills detected metal inclusions in sawn logs and law enforcement uncovered abandoned and hidden weapons. In 1939, just prior to World War II, Fisher moved to an even larger building in Palo Alto at 1961 University Ave. During World War II and the Korean Conflict, Fisher Research Labs was called upon to contribute its technical competence to the war effort, but the M-Scope business was never neglected.

Setting the pace in a changing industry
With the increasing popularity of the M-Scope, and with Fisher’s patent rights expiring, numerous competitors began producing similar detecting equipment. Through its relentless efforts to incorporate the latest technology into its products and by applying the vast field experience of its users into the design of new metal detectors, Fisher Labs led the industry into a new era of detection technology, capability and products. Over the years, Fisher has designed and produced such sophisticated products as Geiger counters, radio communication systems, voltage detectors and cable fault locators.

Dr. Fisher retires, his work carries on
In 1961, Fisher Labs moved again to an even larger production facility in Belmont, Calif. By the time Dr. Fisher retired in 1967 his name and work had left an indelible mark on the electronics history. The company continued to grow, and in 1974, Fisher Research Labs moved to Los Banos, Calif., where it resided until 2006 when it was acquired by First Texas Holdings Corporation.

First Texas moved the company to El Paso, Texas, where it carries on the Fisher legacy of redefining the state of the art in metal detection through technological breakthroughs. The result can be found today in Fisher’s wide array of products, which have the industry’s best ergonomics, most streamlined user interfaces and revolutionary ground balancing and target separation capability.